On 18 July 201, BBC One Panorama brought ‘The Brexit crisis’, a documentary in which Nick Robinson talks with many of the proponents in the unfolding Brexit story (https://www.bbc.co.uk/programmes/m0006wj2). This documentary could be a good classroom exercise on cultural differences in North-West Europe. It is worth seeing. Brexit negotiators Michel Barnier from France and David Davies, EC Secretary General Martin Selmayr, EC Vice-President Frans Timmermans, and a host of British politicians are heard. They are surprisingly candid to Robinson.

Forget Netflix. Forget soap operas. This is the real world.

For those who know Hofstede’s dimensions of culture, the "Brexit Crisis" documentary is a window on a catalogue of European cultures. As background, you could revisit chapter 9 ‘Pyramids, Machines, Markets, and Families: organizing across nations’ in Cultures & Organizations: Software of the Mind 3rd ed. 2010.

A tiny bit of theory

The four metaphors of organization in society, "Pyramid, Machine, Market, Family", result from drawing a two-by-two matrix of Power Distance against Uncertainty Avoidance. Here is a simplified, interpreted version.

The figure shows only two dimensions of culture. A third one is indicated by the oval around the Netherlands. 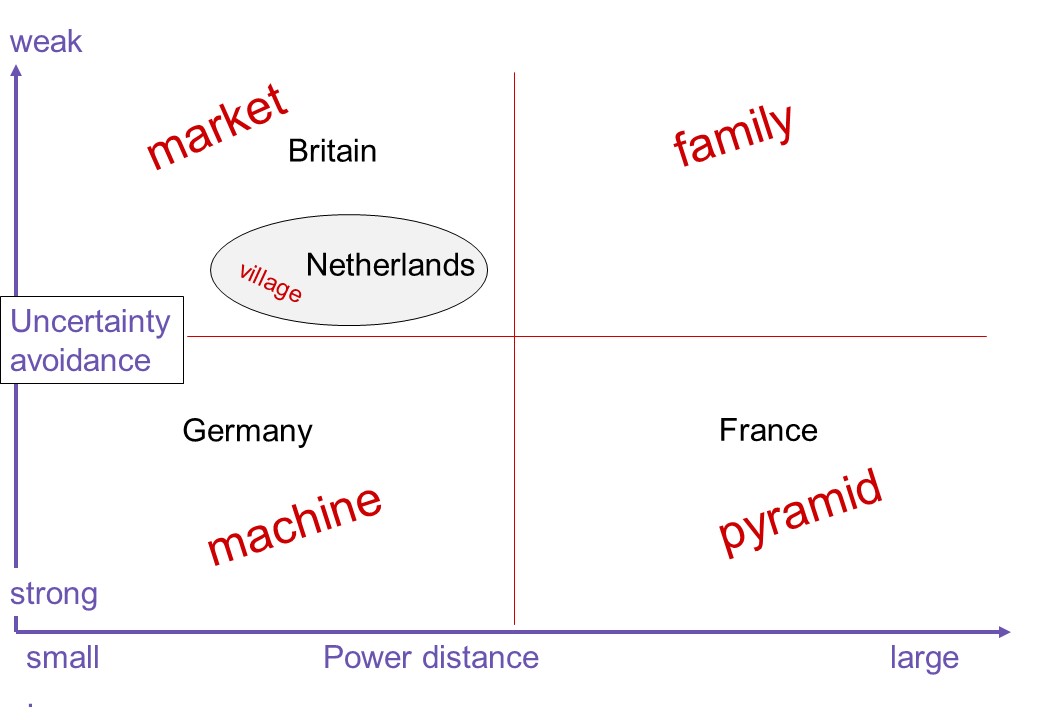 When I watched the ‘Brexit Crisis’ interviews, it struck me that each of the proponents uses a relational logic that fits with their country’s position in the figure. To summarize:

This should be about the future of Europe in the world. If the partners in this process keep forgetting to look at themselves through a cultural lens, they will go on with their needless bickering. At least, that is how this Dutchman looks at it. I am afraid that more bickering is unfortunately a safe bet. Meanwhile Trump, Putin and Xi are laughing their heads off.